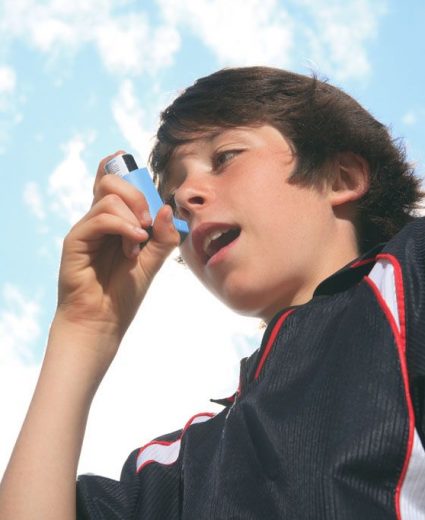 Asthma is a most common respiratory chronic disease and involves 24 million persons in the United States. It is a chronic obstructive pulmonary disease (COPD). Asthma is characterized by narrowing of bronchial airways, reversible expiratory airflow obstruction, and spasm of the respiratory tract. Asthma can severely affect a person’s quality of life and physical activity.

Asthma is a chronic disease which requires treatment and management. Although a cure is not known but medication and physiotherapy treatment can play an important role in managing and controlling its symptoms.

Diaphragmatic breathing exercise and pursing lip breathing technique are widely used in asthma to prevent breathing abnormalities. It will increase air redistribution to the lungs, maximize oxygenation and relieve dyspnea.

Pursed lip breathing – this technique prevents trapping of air into the lungs. It enhances distribution of air in all lobes of the lungs and reduces the difficulties of breathing. Patient should be comfortable in position. Patient should breathe in through the nose and breathe out through the mouth as pursed lip or whistling. It creates vibrations of air which cause positive back pressure and maximizes oxygenation.

Patient should be in tripod position while asthmatic attack. Both hands should be on ground with wide base and neck should be in forward flexion. It relieves breathing difficulties. Chest expansion exercise also improves air re distribution and oxygenation.

Buteyko breathing – patient should be in sitting position. Patient should breathe in shallow and slowly. Expiration should be prolonged until patients feel no air in the lungs. After that, breathing should be held for 5 seconds. This technique maintains normal carbon dioxide level, eliminate hyperventilation of the lungs through breath control and breathe holding.

These above stated management helps to eliminate hyperventilation of lungs, reduces use of bronchodilator and anti inflammatory drugs, air trapping and dyspnea. It also improves quality of life.